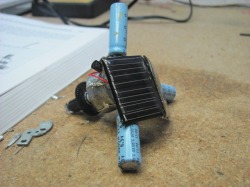 The first robot I ever constructed.
Welcome to my page about robotics. I have been interested in robotics for about four years or so now. When I was studying at Cal Poly I took a sharp interest in control system development. Essentially, control systems, as  a subject, regards the ability to control a system to point and move in a way you intend it to. This is an absolutely fascinating field of study that has direct tie ins into fields like neuroscience and artificial intelligence. Well, when I was studying at Poly, I learned that control system engineering was a heavy component of robotic systems development. Slowly, I began to understand that satellites and spacecraft were really nothing more than robots that orbited planets. And so, I became very interested in learning more about robots and what it means to develop an intelligent system.

I want to make it clear what I mean when I refer to a robot. I consider robots to be autonomous systems, capable of navigating and functioning in their surrounding environment without intervention. This means no commands sent from remote controls, no updating of software by human input, no external control at all. That definition cuts out a few systems that have been considered robots classically. For instance, the show "Battle Bots" pits the "robots" of various teams against each other. I, however, do not consider these robots because they are remote controlled by the development teams. To me, these are nothing more than remote control cars with weapons on them. That's not to say that they are not interesting or complicated systems. I just do not consider them to be robotic systems.

Similarly, I do not consider most current "robotic weapon systems" that are being deployed by the military to be robots. Most of our unmanned aircraft, bomb disposing robots, and so on are really just very complicated remote control systems. Again, they are very impressive systems that I could never imagine to develop on my own. However, they are not autonomous. They do not navigate their environment, carrying out their respective tasks independently of human input. This is a very good thing in most cases. Personally, I do not want autonomous guns flying around and hunting humans without human intervention. But I think it is important to clarify that I do not consider systems such as these to be robots.

So what do I consider robots? Well, for one, I consider the Dexter robot, by Anybots, to be a robot. I also consider most of their other systems to be true robots. I consider the work described by Rodney Brooks in Flesh and Machines to be work done on true robots. For instance, the Genghis bot that Brooks developed prior to writing that book simulates the behavior of a bug entirely on its own. No humans needs to intervene in its control software for it to act like a bug. As such, it is what I consider to be a truly robotic bug.

Now that you know what I mean when I refer to robots, perhaps you will start to understand my passion for the field. I honestly believe that robotics will be the next big change in human society. I feel that, within my lifetime, we will successfully develop AI and robotics systems to such an extent that autonomous robots will become a standard part of our society, just like cars and computers before them. As such, I want to be heavily involved in this particular field as it evolves. So I started tinkering on electronics as a hobby and, eventually, I would like to start developing some small robots at home in my spare time.

Recently, I finished my first project in this endeavor. I built what is called a Symet robot. Symet is a small robotic motor that uses it's geometry and structure to bounce off of obstacles and redirect it's motion. While this is not a complex system, it certainly does fall within my definition of a robot. It is powered by two solar panels on top, so I don't have to intervene to keep it running. It navigates it's environment on it's own, through a very rudimentary form of touch sensory (bouncing). And it pretty much lives it's entire life scurrying about accomplishing very little. Nonetheless, it is autonomous, so it is what I call my first robot. Currently it is buggering around on my bathroom counter.

So that's a little bit about my interest in robots. You can find documentation regarding all of my robotics projects here. I hope you all found this information interesting and/or informative. Please feel free to contact me or visit the other parts of my website.
My Own Robotics Projects on My Blog.